S&P Insurance Group has entered into a partnership 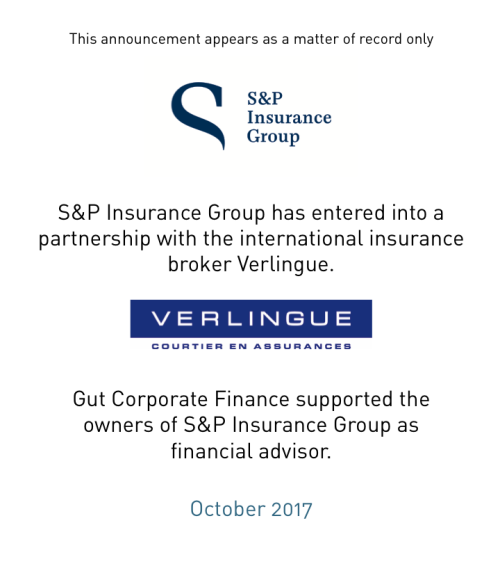 S&P Insurance Group has entered into a partnership with the international insurance broker Verlingue.

S&P Insurance Group AG ("S&P") has entered into a partnership with the international insurance broker Verlingue ("Verlingue"). Verlingue has acquired a stake in S&P.

The partnership between the two companies will create new prospects for S&P as part of an international business group, as well as for Verlingue, which is expanding its presence in the Swiss market.

Headquartered in Kriens, Switzerland, S&P is one of the leading insurance brokers for national and international companies in Switzerland, employs 50 people and manages premiums of CHF 300 million.

Verlingue is a French family-owned company with 900 employees at 17 locations in France, Switzerland and the UK and is part of the Adelaide Group.

Gut Corporate Finance AG acted as financial advisor to the owners of S&P in this transaction. The mandate included the entire project management, transaction preparation including information memorandum and company valuation, management and execution of the due diligence, transaction structuring and support in contract negotiations.